London has been battling migrants coming from mainland Europe for a number of years. Until recently it was much easier for them to make it through the Channel and enter the UK, however, the government has become increasingly stringent at the borders and increased inspections and scrutiny has led to a significant decrease in immigration illegally into the Kingdom. As yet another sign of the lengths desperate migrants will go, today a Eurostar line from Paris bound to London was halted at a station as migrants climbed on top of the train prior to it leaving. This was yet another bid to get across the Channel into Britain, even if the train is particularly high speed and this trip would be beyond dangerous for anyone attempting it.

Passengers on the train had reported footfalls on the room, and many more clamored into the train itself right before the train began moving away from the station. These passengers didn’t have the passport and documentation to make the journey, nor the ticket for the trip. Gentry, a 48 year old passenger on the train, told NBC that manager of the train apologized for the delay, but that migrants had attempted to board the train and climbed onto the room. As a result the train could not depart the station.

Migrants Climbing on the Roof?

Shortly after this all began happening, the train’s PA system issued a request for passengers to notify the staff if they heard any footsteps that appeared to be coming from the roof of the train.  This was to ensure that all migrants had been removed, and none were attempting to hide or run from officials.

This Eurostar line was one of eight train services which connect the French and British capitals that were planned for today that were disrupted by migrants. Eurostar indicated this is becoming more and more of a persistent problem. Eurostar trains routinely travel at 100mph or more in the Chunnel and exceed speeds of 180 mph once they reach the UK. 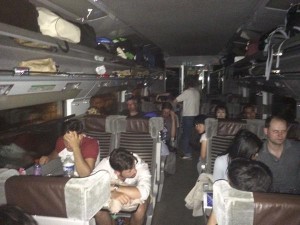 Thousands of migrants and refugees, most illegally entering the EU, attempt such perilous journeys every week, and it’s not clear what Europe can do about it without harsher guidelines and more spending on keeping them from entering the EU. Boats traveling from the Middle East and Northern Africa bring thousands of new immigrants every day, mostly to Italy and Greece. Attempts to halt this by these respective countries has been met with swift anger from the EU commission, though this is changing amidst pressure from European countries to stop the flow.

Gentry ultimately was sent to the French port city of Calais. French police ultimately arrived about 30 minutes later, and a helicopter as well to search the top of the train. In another unfortunate twist, Gentry’s train broke down at Calais before the migrants could be removed safely. To conserve power, the staff turned off the air conditioning and dimmed the lights. Eventually all electricity went out. Passengers were stranded in darkness and intense heat for hours.

As these sorts of incidents grow and escalate, it’s unclear what Europe will do to counteract it. One thing’s for sure, however, these problems cannot continue to persist in their present fashion. Not only are these sorts of searches, transport issues, and subsequent lost work time costly for their economies, but the migrant problem is draining the social nets of many EU countries.